Joe Flacco Says He Is The Best Quarterback In Football 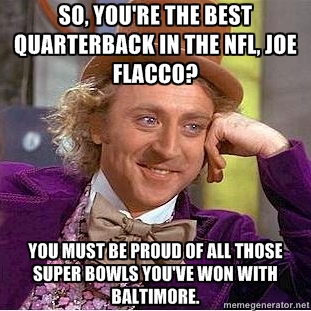 During an interview with WNST-AM, Flacco asserted that he is the best quarterback in the NFL:

Much like Eli Manning’s comments from last season, (stating that he was an elite quarterback), this has the “chicken soup for the quarterback’s soul” tone to it.

However, it’s interesting to see these comments coming from Flacco because…

The second point is the bigger immediate concern for the Ravens.

Joe Linta, Flacco’s agent, stated after season’s end that Flacco deserves to be paid amongst the upper echelon NFL quarterbacks based off his track record, which includes winning 68% of his regular season starts (44-2o record), four playoff wins, and a pair of appearances in the AFC title game for the Audubon, New Jersey native.

He will not get Brady/Manning money but think Mark Sanchez’s recent extension, which rounds out to a five-year, $58.5 million deal.

Back to Flacco’s original claim of being the best, clearly it’s an empty calorie remark.

The identity of Baltimore remains Ray Lewis, Ed Reed, and the rest of the Raven defense.

When one speaks of Baltimore’s offense, it moves quickly to talk of establishing running back Ray Rice.

Flacco needs to stop telling people how great he is and start producing, at the very least, Super Bowl appearances.