The best moment of last night’s 13-10 parade of snooze came courtesy of the victorious Jacoby Jones, whose Ravens earned a three-point win. During a post-game interview with NBC’s Michele Tafoya, Jones winked at her and called her gorgeous. 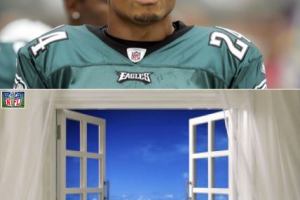 There is a relatively good chance that your team stinks when memes begin to roll out about them. Posted on Facebook by a Philadelphia sports-talk radio station (poor spelling by the way), Nnamdi Asomugha and the Eagles secondary allowed Redskins receivers to roam free yesterday.