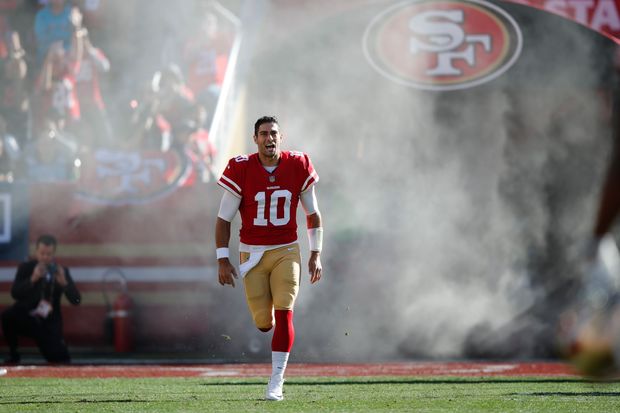 It’s time to fire up the live blog for the NFC Divisional playoffs! Kirk Cousins and the Minnesota Vikings (fresh off of sending the New Orleans Saints home again) roll into Santa Clara, California to take on the San Francisco 49ers. The winner advances to the NFC Championship Game next Sunday night.

4:35ET: VIKINGS WILL RECEIVE TO START.

4:38: The Vikings go three and out in short order after gaining two yards. Time for the Niners O.

4:39: Niners start with relatively good field position around their own 40.

4:42: After a first down into Vikings territory, George Kittle drops a pass but Emmanuel Sanders goes to work with a pair of catches into the redzone.

4:46: Should have taken that long shot Kendrick Bourne parlay at like +600. Damn. Jimmy G to Bourne on a three-yard TD strike.

JOE IS IN THE HOUSE. Reppin the Niners. #MINvsSF pic.twitter.com/oXwIA4OfWh

4:51: Vikings wide receiver Adam Thielen, who had a gash so deep on his ankle that he could touch his Achilles tendon, brings the football near midfield on the next Minnesota drive.

4:53: Vikings tie the game up on a beautiful throw by Cousins and adjustment by Stefon Diggs on a 41-yard score. Cousins leads the Vikings down the field 79 yards on just seven plays.

4:56: It appears the Vikings gameplay has been identified:

4:58: That was the first Stefon Diggs postseason touchdown since he clowned the Saints during ’17 playoffs for the Minneapolis Miracle…

5:00 – Garoppolo gets walloped on a pass but someone completes it to Bourne again inside Vikings territory.

5:02: Garoppolo appears to be a little banged up, calls timeout, and then gets sacked near midfield on first down.

5:06: It’s 3rd and 24 for the Niners after a false start. Jimmy G has nowhere to go on 3rd down and runs out of the bounds on the quarter’s final play from scrimmage.

5:12: Vikings get pinned inside of their 10 after a Niners sack of Cousins….three and out for Minnesota.

5:13: Richie James nearly breaks a punt return for the Niners but gets tripped up near midfield. The 49ers have excellent field position as they try to break the tie.

5:19: Deebo Samuel makes a big first down catch in Minnesota territory after somehow navigating multiple Vikings….BUT one play later, he takes an end around handoff and fumbles. Vikings ball.

5:23: …..or NOT. After a review, the call is overturned. San Francisco maintains possession in Vikings territory.

5:27: Another big Samuel reception brings the ball to the 1 yardline. Moments later, Tevin Coleman goes in from a yard out.

5:32: A good kick return by Ameer Abdullah to the Minnesota 40 goes by the boards as the Vikings promptly go three and out.

5:34: As NBC goes to break, they play a song by Rush, which is notable due to the passing of primary vocalist Neil Peart.

.@EricKendricks54 intercepts Garoppolo and returns it to the 29-yard line! #SKOL #NFLPlayoffs

5:46: 49ers defensive end Dee Ford comes up with a big third down sack on Cousins to thwart a potential tie game. Field goal time for the Vikings with just :36 seconds remaining in the half.

5:49: 49ers head coach Kyle Shanahan opts to end the half with 31 seconds left (bookmark that for later just in case) as Jimmy G takes a knee to bring us to halftime.

6:06: Second half play underway…Garoppolo nearly throws another interception…and then gets bailed out a play later by Bourne who makes a leaping grab near the Minny 40.

6:09: With the Vikings defense on the ropes, they come up with a big 3rd and short in the redzone. Robbie Gould on for the 35-yard field goal…which allows Michaels to bust out a “it’s as good as GOLD” pun. AL MICHAELS = ICON.

6:14: We now have our Cousins and Garoppolo dueling interceptions accounted for…Richard Sherman steps in front of Thielen for an interception in Vikings territory. The only bad news for San Francisco…Nick Bosa is called for a blindside block and that pushes San Francisco back 15 yards.

Can someone tell Kirk it isn’t Monday Night pic.twitter.com/4xah5oR8c5

6:22: Coleman mows through the Vikings defense on an eight-play drive…ALL RUNS. Coleman goes in from two yards out.

6:28: Minnesota can’t convert on a 3rd and 4. For some reason, Cousins is seemingly afraid to run for a first down and tries to jam in a pass to Kyle Rudolph. Incomplete. This game is in big trouble.

6:34: Kyle Shanahan doesn’t seem overly interested in the 49ers throwing the ball at the moment, lol. A whole lot of runs. PUNT.

6:35: Oh lord. Marcus Sherels muffs a punt inside the Minnesota 20. Raheem Mostert recovers for the 49ers near the 10. It’s all over. Time to uncork the wine as we go to fourth quarter with. the 49ers in prime position to tack on another touchdown.

Brett Favre aint walking through that do…. well maybe he will, you never know with Brett…

But Tarvaris Jackson aint walking through that door @Vikings

6:47: Cousins gets sacked again by Ford and Bosa. Another Vikings punt. Bosa appeared to be injured but milked the crowd like a wrestler milking applause…

When you wake up the next morning and you’re not alone in bed for once pic.twitter.com/t7QyXf7KkB

The only drama left in this game is if Kyle Shanahan will let Jimmy G throw a forward pass again.

6:48: Shoutout to Cris Collinsworth, who made a Gorgeous George reference. For those who don’t understand…

6:54: More of Jimmy G handing off to setup a 49ers punt. I’m guessing his next pass is going to be sometime next Sunday evening.

6:57: Three and out for the seventh time go the Vikings, who resemble the September and October version of the Miami Dolphins in this game.

7:06: With just over four minutes left, the 49ers have made the Vikings look like a JV team. Should have known once Joe Montana and Jerry Rice were seen in the building that it was a wrap. They are probably still heated about the ’87 playoff loss.

7:09: Let’s check in with Saints wide receiver Michael Thomas, who is at home because of the Vikings:

7:11: On 4th and 1 in 49ers territory, Cousins goes deep to Diggs again but this time it’s broken up. Turnover on downs.  TWO MINUTES LEFT IN CALI.

7:15: A quick note on the Vikings offensive line play:

7:16: If the 49ers win the Super Bowl, that Dre Greenlaw tackle against Seattle should be remembered as one of the greatest tackles in league history. Meanwhile, Matt Breida just coughed up the ball at midfield. Vikings ball with 90 seconds left.

7:22: Jimmy G takes a knee…and it’s onto the NFC Championship Game for the 49ers.

SUMMARY: I don’t think either Seattle and Green Bay will have enough gas in the tank to beat the 49ers. The Niners hit you on the way to actually making the play. Lord, they are a tough, hard-hitting bunch. The Vikings gave it the old college try, but it was just too much Niners D. Just think, the 49ers didn’t click in the passing game.