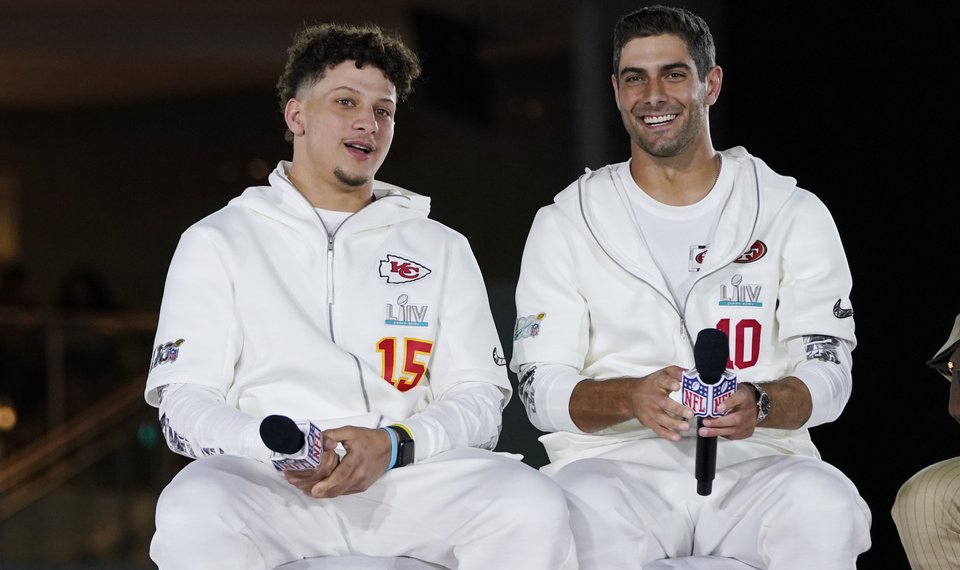 We’ve reached the finish line of the 100th NFL season as the San Francisco 49ers look for their first Super Bowl win since January 1995. Meanwhile, the Kansas City Chiefs are attempting to grab their first Lombardi since January….OF 1970.

6:15 – The NFL completed perhaps its finest work in sometime. They brought out nearly every living member of the NFL 100 All-Time Team. They were introduced in various ways: teams, characters, coaches, quarterbacks, etc.

The highlight was Bill Belichick’s humble brag by flashing only three of his EIGHT Super Bowl rings. Respect the game.

6:27 – Demi Lovato is out for the National Anthem. Unrelated, I’m live-blogging from a bar in North Carolina while eating a Hawaiian pizza. What could go wrong?

6:31 – We already running behind schedule for some reason.

6:34 – San Francisco wins the coin toss and elects to defer to the second half….barely.

The kicker from the Chiefs said “kick it”

Almost a colossal error by the Chiefs already. Lol. #SuperBowl

6:40 – Some random kid just ran out with the ball to midfield. I don’t know what’s going on. This is taking forever to start.

6:43 – Megamillions Mahomes goes three and out to start. Bosa tipped the first pass and Mahomes threw wide of Damien Willams on the second.

6:44 – Richie James almost gives Niners Nation an aneurysm by muffing the punt. He recovers though.

6:46 – Back to back first downs by the 49ers. First, Kittle reception for 11 yards, which is followed by a 32-yard run by Deebo Samuel into Chiefs territory.

6:49 – The Niners are moving the ball like they are the Harlem Globetrotters on this first drive.

7:00 – 49ers decline an ineligible receiver downfield penalty against the Chiefs near midfield and KC takes advantage by grabbing a first down in 49ers territory.

7:03 – Travis Kelce makes a first down catch into red zone. Chiefs are cooking.

7:04 – Mahomes takes off on 3rd and 11 for what appears to be a possible touchdown but Jimmie Ward smokes him to force a fumble that sails out of bounds, which might negate what would have been a first down inside of the 5.

7:08 – On fourth and 1, the Chiefs run a special direct snap to Williams, which gets a first down at the 1.

7:10 – Mahomes runs an option keeper and takes it in from the 1 to get the Chiefs on the board.

7:15 – Garoppolo to Emmanuel Sanders for a first down near the 50 to close out the first quarter.

7:17 – In Super Bowl commercial news….our football lord and savior has checked in.

I have an important announcement #ad pic.twitter.com/58KD1jmaC3

7:20 – Bashaud Breeland intercepts Jimmy G, who threw it more like James Garoppolo, near midfield. Terrible move by Garoppolo on a 2nd and 11. Live to fight another day. Turnovers are not allowed in Super Bowls, dude.

Jimmy Interception, the "Next Brady."

7:23 – Mahomes finds a hole in the zone for 28 yards to Sammy Watkins deep in 49ers territory.

7:26 – FOX has kept the quarterback numbers up the whole way here. I want QBR and running DVOA added.

7:29 – 49ers quickly force 4th down…and a Chiefs field goal. Good job preventing the game from getting out of hand early.

7:34 – We finally get some Raheem Mostert screen time and two runs yield a first down past the SF 29.

7:36 – Another Mostert run is into Chiefs territory….and then Coleman rips one for 17. When the Niners get clicking, they look like a team from the 70s.

7:38 – The Chiefs officially surrender their lead as Garoppolo continues to channel the spirit of Bob Griese. He hits fullback Kyle Juszczyk to on a TD pass to tie the game up at 10. Great recovery by Young James.

7:44 – The 49ers baptize Mecole Hardman on the kickoff and he’s now nursing an arm injury. Meanwhile, the Chiefs are in 49ers territory once again. Credit the Niners though. Super Showdown Mahomes is having to earn every yard he is getting.

7:49 – Chiefs try to run a trick play with the returning Hardman. The end around results in a six-yard loss back in Chiefs territory.

7:52 – 49ers D holds again on third down, which leads to a punt with just under two minutes left in the half.

7:56 – The 49ers aren’t into the whole “let Jimmy G throw another potentially game-altering interception.” They run, run, run to end the first half since they get the ball to open the second half.

7:58 – Garoppolo hits a 30-yard play to Jeff Wilson in the middle of the field with 14 seconds instead of just giving up.

8:00 – Garoppolo hits Kittle on a long throw inside of the Chiefs 20 for 42 yards….BUT OPI is called on Kittle. Tough call…but the right one. That penalty writes a finish to the first half.

8:17 – Thoughts on the Shakira/J-Lo Halftime Show:

.@NFL my son just humped a hole into our sectional couch i hope ur happy

8:48 – Chiefs start out deep in their own end after a penalty following the kickoff but Mahomes digs them out with a pass to Watkins for 19.

8:51 – On the next play…Mahomes is INTERCEPTED by Fred Warner. I have no earthly idea what Mahomes saw there. Brutal throw.

8:58 – San Francisco capitalizes on the Mahomes interception. They quickly drive down field on the back of a Kendrick Bourne reception to the KC 10. That is punctuated by a Mostert TD run.

They can't block MAGA Bosa, nothing stopping him from getting to Trump, he is possessed

9:07 – The Chiefs are near midfield as the quarter ends. Nothing and I mean nothing is coming easy right now.

9:14 – As the Chiefs are closing in on a score to draw closer, a Mahomes pass goes off the hands of Tyreek Hill and is intercepted by Tarvarius Moore. Folks, it’s not over but we’re really close.

9:23 – Just like Super Bowl XXXIX against New England, an Andy Reid operation is down 10 with just over seven minutes left in the game.

9:34 – Mahomes underthrows a pass to Travis Kelce in the end zone but Moore commits pass interference. Ball at the SF 1.

9:42 – Mahomes down three with just over five minutes left at the KC 35. Hold onto your britches.

9:44 – Mahomes hits a streaking Sammy Watkins, who beats Richard Sherman down the sideline into the redzone. Uh oh spaghetti-o.

9:46 – Williams scores on a short pass from Mahomes. It’s disputed because Williams stepped out at some point but it’s unclear if he was already in. The officials say he was. Oof.

9:55 – TWO MINUTE WARNING. 2ND AND WHATEVER FOR THE NINERS. They have to get it. That’s all you need to know.

10:08 – Garoppolo gets the ball back and is intercepted to seal it.

10:11 – Fittingly, Patrick Mahomes kills the clock on a 4th and 26 – a signature play/moment for Andy Reid when he was head coach for the Philadelphia Eagles.

SUMMARY: An incredible comeback for the Kansas City Chiefs and a devastating collapse for another Kyle Shanahan outfit. It will be a long time before the 49ers get over that one.