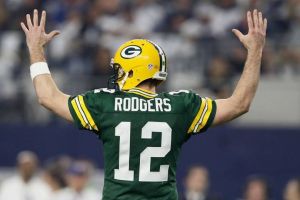 Just as they did last January, the Green Bay Packers nipped the Dallas Cowboys at the finish line on Sunday.

Will Jerry Jones Go To Battle With Roger Goodell Over Zeke Elliott’s Suspension?

The NFL announced a six-game suspension of Ezekiel Elliott on Friday due to a violation of the league’s Personal Conduct Policy.

Tony Romo & Jason Witten Tweeted Their Goodbyes To Each Other

One of the greatest NFL romances ever reached its conclusion last week. No, not the Aaron Rodgers/Olivia Munn relationship that went belly up. Instead, we have seen the last of former Dallas Cowboys quarterback Tony Romo and tight end Jason Witten.

The Dallas Cowboys and their national fanbase are still licking their wounds following a heartbreaking 34-31 loss to the Green Bay Packers on Sunday in the NFC Divisional playoff round. Green Bay’s Mason Crosby kicked the Packers into the NFC title game with a 51-yard game winner. Last […]

Over the next couple of days, we will surely see Packers and Cowboys fan videos reacting to the dramatic conclusion of their NFC Divisional playoff game on Sunday.

The Dallas Cowboys Make A Bandwagon Application Available For Fans

The Dallas Cowboys have been on-fire on the field this season and now, have shown why they are just as incendiary off of it. Prior to their NFC Divisional playoff game against the Green Bay Packers on Sunday, the Cowboys’ Twitter account posted an application for new fans […]

Who Does The Mannequin Challenge Better? Cowboys Or Giants?

The Mannequin Challenge is the latest viral sensation to take the Internet by storm. Simply, everyone stays still during the shot. While it seems dumb, considering what happens in some of these shots, it’s rather impressive.

The San Francisco 49ers host the Dallas Cowboys on Sunday in a game that may bring back some old memories to fans of the two squads. Dallas and San Francisco famously met in three straight NFC Championship games from 1992 to ’94.

Social media can be an unforgiving place for any athlete. Today, Dallas Cowboys wide receiver Terrance Williams found out the hard way. Trailing 20-19 at home, the Cowboys launched a desperation drive against the New York Giants on Sunday. With under 10 seconds remaining, Dak Prescott completed a […]