It’s Halloween weekend around the country and that means it’s time to see NFL fans come up with their best NFL-related costumes. This effort put together today by Saints defensive coordinator “Rob Ryan” and head coach “Sean Payton” easily takes the cake.

Sean Payton Is Watching You

As the Saints practice at their training camp facility in Metairie, Louisiana, the figure of Sean Payton still lurks in the distance with the head coach serving a year-long suspension. A large sign of Payton hangs in the building with the Belichickian phrase “Do Your Job” in large […]

Months after receiving a year-long suspension over Bountygate, New Orleans Saints head coach Sean Payton is back in the news but for non-football matters this time around. He filed for divorce from his wife of 20 years, Beth, back on June 14, according to The Times-Picayune on Monday.

Well, that didn’t take long. If you’re looking for the latest in hip wear, check out DirtyCoast.com. For just $25, you can be the proud owner of a “Free Sean Payton” t-shirt to support the suspended leader of the New Orleans Saints. One man who hopped on the […] 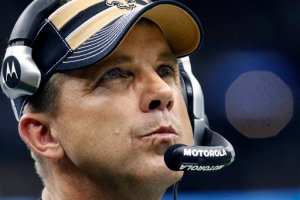