Video of the Day: Fight Time

It’s the 100th meeting between the Eagles and Cowboys and you know what that means…the end of days in Philadelphia. Fresh off of seeing the Phillies drop the World Series, Philadelphia fans are sure to be frisky. After all, they’ve had all day to tailgate before an Eagles/Cowboys […] 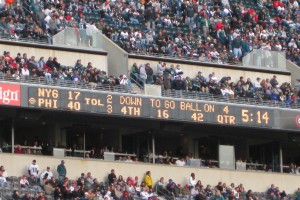 Bare with me through our latest voyage. Thanks to the Phils’ World Series loss, I’m in a bit of an ornery mood these days. My email box and Facebook account has been swamped with arrogant and cocksure emails from Yankee fans celebrating title 27. Most of which I […]

Adrian Peterson is a machine.

Video of the Day: Billy and The Pats

As we stand days away from a potential Phillies-Yankees World Series and the biggest sports fan battle to hit the east coast in decades, it is time to issue a test. I’m declaring open season on all fraudulent fans; and as they say on the streets, let’s not […]