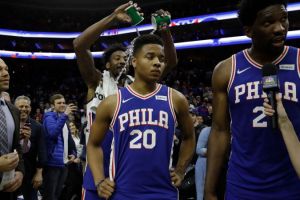 If I had just dropped an alien onto Earth and told them the Philadelphia Eagles are the Super Bowl champions, they would naturally come to one conclusion.

Bill Simmons began a feature today on his Twitter page called You Tube Classic. One of the videos featured is from Game 3 of the 1981 Eastern Conference Finals between the Boston Celtics and Philadelphia 76ers. Apparently, times were different back in the early 80s because you could […]