San Francisco 49ers cornerback Richard Sherman played very well on Saturday and that may have caught the attention of the NFL.

Former Seattle Seahawks cornerback Richard Sherman did not last very long on the free agent market one day after being let go by his ex-team.

After two weeks talking about deflated balls and Marshawn Lynch’s utter disdain for the media, Super Bowl Sunday has arrived as the New England Patriots try to stop the Seattle Seahawks from becoming the eighth franchise in NFL history to repeat as Super Bowl champions.

In anticipation Madden NFL 15’s impending release in just under two weeks, EA Sports released arguably one of the most bizarre commercials in video game history.

After a 16-player tournament voted on by the fans, Seattle Seahawks cornerback Richard Sherman was named the Madden NFL 15 cover athlete and will grace the front of the popular video game franchise.

While America is drowning in Mallory Edens articles, the Super Bowl champion Seattle Seahawks made their way to the White House on Wednesday. President Barack Obama paid tribute to Richard Sherman, Russell Wilson, and friends but one man was missing.

While addressing the masses at last night’s White House Correspondents’ Dinner, President Barack Obama used Seattle Seahawks cornerback Richard Sherman as a source of inspiration. Obama said he discovered a new way to deal with the media based off of Sherman’s legendary NFC title game rant against 49ers […] 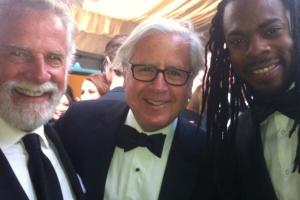 While Tom Brady and friends were stylin’ and profilin’ at the Kentucky Derby on Saturday, other NFL stars spent time in Washington at the annual White House Correspondents’ Dinner. Seattle Seahawks cornerback Richard Sherman, a Super Bowl champion and the world’s top Michael Crabtree hater, was among several NFL […]