As Brett Favre prepares to offer up one of the great double-crosses in sports history by basically turning his back on Packer fans by playing for their hated nemesis, it is only proper to honor the 10 greatest bad guys of the 1980s in pro wrestling; and providing […]

There will be a test on your reading assignments later…

In an effort to bring you the best in all things NFL and then some, I bring you First and 10, a collection of ten links that will enrich your life somehow or annoy you. Either one works for me.

Back In The Saddle Again

The NFL’s real golden boy made his return to the practice field on Tuesday with his teammates for the first time since suffering a season ending knee injury last September, as the Patriots began the first of four days devoted to OTAs (organized team activities). While normally this […]

Its Been A Brady Kind of Week

Once March Madness fades to black, the NFL will take center stage as we close in on April’s draft. However, this week has been full of Pats talk or Brady discussion specifically. On Tuesday it was revealed that Tom Brady enjoyed marrying Gisele Bundchen so much last month […]

Last night marked a big day in New England Patriots history. Tom Brady reportedly tied the knot with girlfriend Gisele Bundchen in Los Angeles. In other Pats news, New England added Fred Taylor to its backfield. He’ll compete with Laurence Maroney and a host of others for playing […]

While speaking to the West End House Boys and Girls Club in Allston, Massachusetts, Tom Brady proclaimed himself ready to roll for the 2009 season opener. The three time Super Bowl winner was on hand to donate 1,000 laptop computers to the One Laptop Per Child program and […] 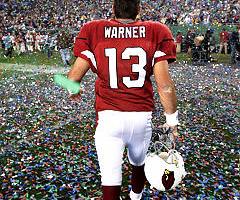 Kurt Warner Is A Hall of Famer…Period.

Kurt Warner is a Hall of Famer, period.  Hopefully this isn’t the last we’ve seen of Warner, but if it is…what a glorious ride it was. He wasn’t the number one overall pick in the draft or a quarterback with a pedigree from a BCS school. Instead, the […]