Tebowing Gets Tagged In The Most Respectful Manner

I figured the best way to help snap people out of Tebowing is to start tagging those pictures with paint art graffiti based off of his statistics. Tim Tebow’s Broncos were walloped by the Detroit Lions yesterday, 45-10, in front of Denver’s collection of Tebow loyalists.

The world is a weird place sometimes. During yesterday’s 20-17 loss to the Miami Dolphins, Reggie Bush rushed for 103 yards, which marked just the second time in his six-year career that the former Saints running back hit the century mark. Hours later, news has arrived that Bush’s […] 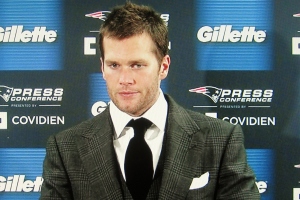 After viewing Pittsburgh’s 25-17 victory over New England, its evident the 5-2 Patriots are suffering from numerous problems. New England’s defense was shoved around by Pittsburgh all day. The 6-2 Steelers converted 10 of 16 third down chances, gained 427 yards of total offense, and held the ball […]