http://twitter.com/#!/TheBillWalton/status/130796610371325953 These are sad times for Dallas sports fans. Last Thursday night, the Rangers were a strike away from winning the World Series (twice). Less than 24 hours later, they were sobbing tears of regret as the Cardinals became baseball’s best. Now, Dallas turns its lonely eyes to […] 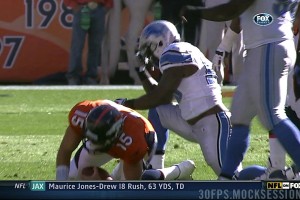 The “Tebowing” phenomenon that is sweeping the nation got another boost on Sunday when Lions linebacker Stephen Tulloch sacked Tim Tebow during the first half of Denver’s meeting with Detroit. After the sack, Tulloch went to work. Surely, he will not be the last defender to do this. […]

The Eagles and Cowboys resume their rivalry this evening at Lincoln Financial Field on Sunday Night Football. During halftime of tonight’s contest, the Eagles will induct the late Jim Johnson and former cornerback Eric Allen into the team’s Honor Roll.

After the St. Louis Cardinals salted away Game 6 of the World Series on Thursday night, Bill Belichick did what any good friend would; he showed support for his buddy Tony LaRussa. Belichick wore his LaRussa again on Friday prior to St. Louis defeating the Texas Rangers in […]