Just like that, it’s over for Pittsburgh. Tim Tebow and Demaryius Thomas teamed up for an 80-yard overtime touchdown to defeat the defending AFC champion Pittsburgh Steelers, 29-23, in an AFC wild card game on Sunday.

Everyone’s favorite gunslinger appeared at the Superdome on Saturday night during the Lions-Saints playoff game. 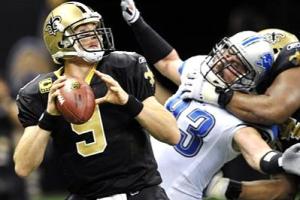 The opening day of NFL playoff action illustrated two things that were already evident; it’s tough to win on the road in the playoffs and if defenders leave Saints receivers open by 10 yards, they’re likely to catch touchdown passes.

Arian Foster’s Haircut Is Ready For The NFL Playoffs

Arian Foster decided to amp it up for today’s wild card playoff game against the Cincinnati Bengals. This picture displays Foster with the Texans logo shaved into his head in preparation for the first postseason game in franchise history. With that type of look, I sure hope the […]

To those whose teams I pick against, it’s nothing personal just business. I don’t hate your teams. At worst, I’m probably not fond of your quarterback. Without furtherado, here are your blog mandated picks for Wild Card weekend. By the way, I have no interest in laying points […]

New England Patriots offensive coordinator/quarterbacks coach Bill O’Brien was named the new head football coach at Penn State University yesterday, as the Nittany Lions attempt to close the book on the Jerry Sandusky/Joe Paterno situations. O’Brien’s star gained notoriety with fans when he got into a sideline screaming […]

The JMRA Guide To The NFL Playoffs: New Orleans Saints

The playoff preview continues with the Super Bowl XLIV champions…