Lions Get Screwed Late By Officials In Loss To Seahawks 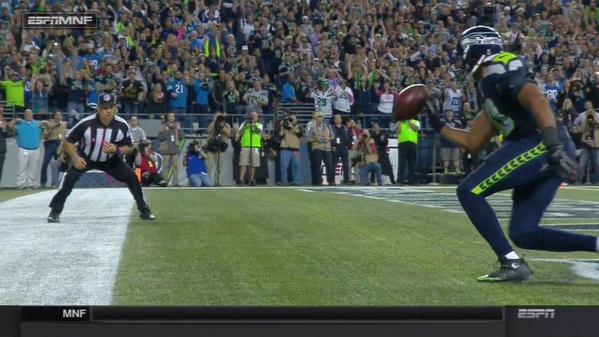 The Seattle Seahawks did it again on Monday night…and by “did it again”, I mean getting a fortuitous break from the officials on Monday Night Football against an NFC North team.

Clinging to a 13-10 lead with under two minutes left, Detroit’s Matthew Stafford completed a pass to Calvin Johnson on a 3rd and 1. Johnson headed to the end zone but Kam Chancellor knocked the ball away from Johnson as he was about to cross the goalline.

Moments after the game’s conclusion, ESPN’s Mike Tirico and Jon Gruden were joined by rules consultant and former official Gerry Austin, who said the Seahawks were incorrectly awarded the football after Johnson’s fumble went through the back of the end zone following an illegal bat.

By rule, the team that last possessed the football should have been awarded the ball at the last spot they Seattle’s KJ Wright intentionally batted the ball out of the end zone after Johnson’s fumble.

Let’s check in with the NFL VP of officiating Dean Blandino for his thoughts on the call:

Blandino: “Judgment call on the field. Back judge felt it wasn’t overt. That’s why he didn’t call it on the field."