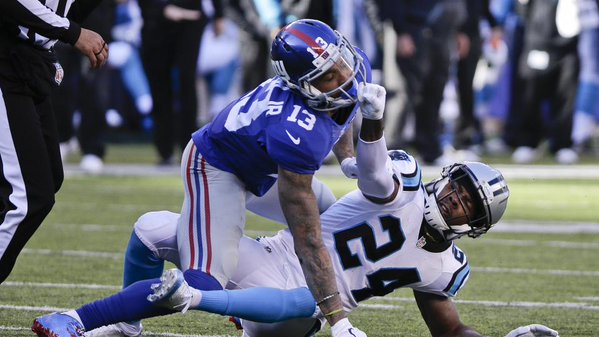 The real fun began in the second half when Beckham made a first down catch in front of Norman. As the Panther rose to his feet and tried to walk away, Beckham tripped Norman and drew a 15-yard penalty for unsportsmanlike conduct.

Later on, Beckham speared Norman after a running play, which drew more penalty markers…but not an ejection.

Beckham eventually got even (sort of) by scoring a touchdown and pulling out an homage to Allen Iverson and stepping over Norman following a game-tying touchdown reception in a wild fourth quarter.

After the game, Norman was none too pleased over Beckham’s histrionics.

That was a cleaned-up version of what Norman said in the ensuing moments following the game.

Beckham needs to spin less time practicing one-handed catches and more time learning how to be a professional.