The Baltimore Ravens are not your father’s Baltimore Ravens at the moment. They have limped (literally) into Week 15 with a battered lineup. They are so desperate that they signed Captain Sleepytime Ryan Mallett this week.

Joe Flacco Is Out For The Year With A Torn ACL

Late in their victory over the St. Louis Rams, the Baltimore Ravens lost quarterback Joe Flacco for the season to a torn ACL. The injury was confirmed by Ravens head coach John Harbaugh in his postgame press conference.

John Harbaugh Made It Awkward On Jay Gruden & A Reporter

Baltimore Ravens head coach John Harbaugh was not a happy man on Saturday night during a preseason loss to the dysfunctional Washington Redskins. 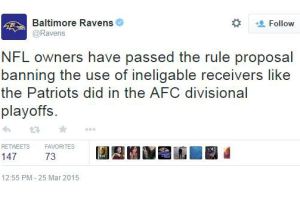 The NFL agreed to a rule change that stemmed from the Baltimore Ravens/New England Patriots second round playoff game last January. During their playoff meeting, New England utilized an old ruling that allowed eligible receivers to line up in multiple positions on the field but as an ineligible […]

Rarely do the New England Patriots lift a finger to take a jab at an opponent, especially following a playoff game (unless your name is Wes Welker). However, when their integrity was questioned, Tom Brady went on the defensive. 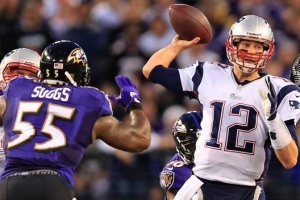 As they did in 2012, Terrell Suggs and the Baltimore Ravens aim to disrupt another postseason meeting between Tom Brady and Peyton Manning.

If we know anything about Steve Smith, it’s that the former Carolina Panthers receiver doesn’t mind getting loose with players and teams when it comes to on-the-field matters. Smith was at his best on Sunday during Baltimore’s 38-10 beatdown of Carolina. During the contest, Smith grabbed a pair […]

Earlier this week, former Carolina Panthers receiver and current Raven Steve Smith Sr. promised a “blood & guts” affair when the two teams got together on Sunday.

The miracle has happened. NFL commissioner Roger Goodell gave his first nationally-televised, sit-down interview on the Ray Rice situation on Tuesday. Goodell, who has kept an extremely low profile since issuing Rice’s two-game suspension in late July, spoke with Norah O’Donnell of CBS and discussed whether anyone in the league […]

Amidst the blitzkrieg of media attention garnered by the release of the Ray Rice tape, the star of this week’s Sports Illustrated cover is the grainy Atlantic City video that shows the ex-Raven moments before he strikes his future wife.