When Sunday’s Daytona 500 arrives, a pair of celebrities will usher in the race’s beginning. Newly retired and newly minted Super Bowl champion Ray Lewis will serve as the honorary starter of the Daytona 500. 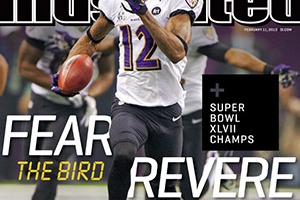 Sadly, the 2012 NFL season is over. Before we completely close the book on the ’12 season, let’s take a final look at the 20 most popular stories of the season based off of your trusty reading habits.

Denver Mayor Michael Hancock had to pay off a bet after the Broncos lost to Baltimore in the AFC playoffs back on January 12. Due to the Denver loss, Hancock recently performed the infamous Ray Lewis shuffle to pay off the wager.

Beyoncé May Be Your Super Bowl Panacea

As America happily pours dirt on the remains of the 2012 Patriots and basks in the glow of a non-Brady/Belichick Super Bowl, Peter King of Sports Illustrated wrote an interesting tidbit revolving around the new AFC champion Baltimore Ravens.  King surmised that America was growing tired of Ray Lewis. Considering […]

Ray Lewis fell into the eye of a controversy during Super Bowl Media Day on Tuesday when a published report from Sports Illustrated fingered the Ravens linebacker for using a banned substance to help with a torn right triceps injury. Lewis denied ever using deer antler spray, which contains the […]

We are days away from the Patriots and Ravens in the AFC title game. We could also be days away from the final game of Ray Lewis’s storied career. Sensing the impending end of his career, Clear Channel Communications produced a billboard in Boston that provided a countdown […]

The Denver Broncos will get the next opportunity to send off Ravens linebacker Ray Lewis into the sunset without another Vince Lombardi Trophy, after Baltimore finally pulled away from Indy on Sunday in the AFC playoffs. The 24-9 wild card win for the Ravens puts them in Denver […] 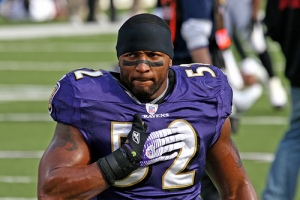 Ray Lewis Is Done For The Year; Career In Peril

During yesterday’s 31-29 Ravens win over the Dallas Cowboys, Ray Lewis suffered a torn right triceps injury. One day later, Baltimore’s worst fears were confirmed; Lewis is done for the year.

Getting hyped for video game releases is a lot different 11 than it is at 22 but when Ray Lewis is used as a verbal launching pad in Madden ’13, it’s a different ballgame. Released on Tuesday, Madden ’13 features the future Hall of Fame linebacker talking about […]