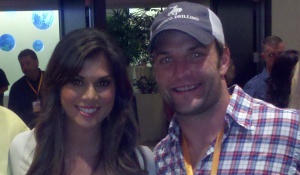 According to Alvin Chang of The Boston Globe, Mrs. Welker’s rant on Ravens linebacker Ray Lewis caused a sizable increase in traffic to his Wikipedia page.

The Super Bowl XXXV MVP’s Wikipedia page saw over 500,000 hits on Monday. One day earlier, the Lewis page only recorded over 46,000 hits a day earlier.

Even though the Facebook post was deleted and Mrs. Welker issued an apology, the masses went over to the page in droves to see what all the fuss was about.

This is just another piece of evidence as to why the media’s tact towards Lewis in New Orleans will be one of Super Bowl week’s significant subplots.