It’s party time ladies and gentlemen. The 2010 NFL season has arrived and so has the first live game blog of the season.

8:31pm – Hello free world…we are back in business!!! Well, you knew this was going to be a spectacle. Harry Connick Jr. and Saints owner Tom Benson arrive to the field via float. Here comes the championship banner…and the world champions. That’s quite an entrance.

8:38pm – You know what I don’t want to come back as in a second life? A singer. If you think athletes get shuffled in and out like meat, the same applies to the music industry. No offense Colbie Caillat. Just saying. You may forget her name in six months.

8:40 – After Colbie’s National Anthem, Saints players are seen putting up the number one…no, not for them being Super Bowl champs. Instead, making a statement to the league and signifying that they are one. Wow. A labor statement to begin things. Uh oh.

8:45 – Woah. Saints go right down the field and the drive culminates on a 29-yard touchdown pass to Devery Henderson. The Saints look like…world champions.

8:49 – The Vikings have to survive the first quarter. The euphoria will wear down, eventually.

8:53 – I have to admit that I’m very disappointed that we don’t get Darren Sharper tonight. He is the leader of the Saints trash talking brigade. Who else could possibly inspire this photo? 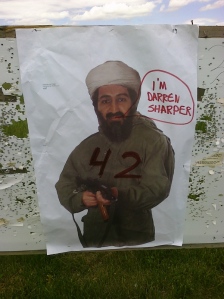 8:56 – After a Saints punt, we are treated to a Jerry Jones/Dan Snyder Papa John’s commercial to help promote Sunday night’s affair as well. George Preston Marshall is rolling over in his grave as the commercial finishes up.

9:01 – Pretty clear the Vikings miss Sidney Rice on Favre’s passes in this game. Not seeing much separation by Viking receivers.

9:03 – Minnesota nearly salvages a 2nd and 30 but come up a few yards short. The highlight of the drive is when Al Michaels says Saints defensive coordinator Gregg Williams is also known as Dr. Heat. That is a top 5 nickname.

9:07 – Brees drops the snap, rolls out in his own endzone and hits Robert Meachem on the run downfield. Yes, he is the world heavyweight champion of….of course, as I type this Brees is called for a false start penalty.

9:14 – Vikings are allowing way too much time for Brees to operate. Although, they are covering reasonably well down the field.

9:15 – The first quarter of the ’10 season is in the books. By the way, NBC showed an ad for a new phone, the Samsung Fascinate, with a hyped up version of the Human League song blaring in the background. Which leads us to this timeout…

9:19 – Favre’s ankle and hamstring photos pop up on the NBC telecast. Of course, his ankle is up for nomination in the Joe Montana’s Right Arm Hall of Fame.

9:25 – Oh man. Peterson is going to be in for a long season. 370 carries…get ready. Peterson already with 12 carries halfway through the second quarter.

9:31 – Hey, why are we waiting 23 years to release the sequel to Wall Street? Chuck Sheen not available?

9:33 – Minnesota finally gets something on the board thanks to hard work of Adrian Peterson and a Ryan Longwell field goal.

9:34 – Al Michaels made a po-boy sandwich reference. That sandwich is a Favre staple. 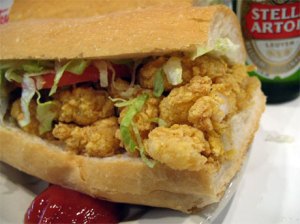 9:37 – The Saints must have licked their chops at the Minnesota secondary problems. They have only one running play to their credit.

9:40 – Worst drive of the game for New Orleans thus far. Two penalties and a dropped interception close out the drive.

9:44 – And yes, there it is. Favre gets blasted…and gets intercepted.

9:50 – A big win for Favre and the Vikings as Hartley shanks one to the left.

9:53 – The Gunslinger unleashes a rope to Darren Sharper’s least favorite Viking (Shiancoe) deep into Saints territory. Again, not having Sharper takes some minor sizzle away.

9:55 – Less 90 seconds later…Shiancoe for six. Somewhere Sharper his gnashing his teeth. Longwell’s extra point was blocked. It’s funny. From the naked eye it appears the Saints defensive line is beating up Minnesota’s front a bit. However, that doesn’t matter at the moment.

HALFTIME: Seriously, the Vikings should have been blown out of the building based off of the line play through the game’s first 20 minutes. Credit Childress for dialing up enough runs to bore the New Orleans defense and protect Favre, most importantly. Also, the Saints better mix it up. An all-pass no-run game plan may not be the way in this game.

And now for tonight’s halftime entertainment…

10:12 – Is Sean Payton getting outcoached by Brad Childress?

10:15 – Say what you want about Revis, but Jabari Greer was pretty damn good last year as well. Not many seem to notice though except for FootballOutsiders.com. Anyhow, he breaks up a throw to Berrian and its punt time.

10:16 – Apparently, Tom Brady’s deal done. One of my friends hates Brady and just sent me an angry text about him making $19 million per season. All I know is, that mop is still boss.

10:22 – I believe we have our first unabated to the quarterback call of the season. I always support that line.

10:25 – Sean Payton must have heard about the Childress line. He abandoned Plan A and just went to Plan B, which featured a lot of running. Touchdown Pierre Thomas.

10:31 – Here’s a random prediction. I might miss Darren Sharper but I don’t think the Saints will – at least in terms of on-field ability. After all, I was starting college during Sharper’s rookie season.

10:36 – Interesting game so far. The Vikes are still hanging around as some of the matchup problems from the NFC title game still linger for the Saints. Their offensive line labors against Minnesota’s front, which is not shocking.

10:42 – Percy Harvin is going to get a talking to after this game is over. Brett Favre is expecting A and he is getting B.

10:48 – Promo for the upcoming Cowboys/Redskins game on Sunday night…which reminds me of something. Who has gone through more transition? The White House from the years of 1980-2010 or 2000-10 Redskins? Enough already Washington. Get it together.

10:50 – A whole lot of punting going on as the offensive well has run dry. We head to the fourth with New Orleans still up by 5.

10:53 – A Jim Kleinsasser “reception” leads to our first challenge of the season. Chilly will lose this one.

10:56 – Challenge lost. Kleinsasser didn’t protest but there was no way to tell if he caught it.

10:57 – Bryant McKinnie was just carted off. No truth to the report that Favre drove the cart so he could get his car keys and drive back home for the season.

11:02 – A dropped touchdown pass and second missed field goal by Hartley keeps it a five point lead for New Orleans.

11:07 – A Greg Camarillo catch gives Favre his first completion of the fourth quarter…and second half.

11:11 – Another Viking drive ends in frustration. Five minutes left and there are a lot of nervous gamblers watching this game across the land.

11:17 – A pair of killer first downs picked up by the Saints off of Breesus’ arm, which may be one of the final nails in the coffin for Minnesota tonight.

11:22 – Another first down for the Saints and Pierre Thomas, who was in the Witness Protection Program apparently during the first half…cue up Willie Nelson.*

*The Don Meredith version of this song on You Tube doesn’t do it for me.

Synopsis: If you’re a Saints fan, you have to be encouraged despite the lack of offensive fireworks. The Saints showed that they could hold a lead and play in a low-scoring affair. They may have to do it again next week when they head out to San Francisco. As for the Vikings, trouble looms. They face Miami next week in what could be a mega letdown game for them.

11:29 – It could have used more offense but it’s good to have football back. Now, onto Sunday…