The Denver Broncos have a great defense, legendary quarterback, all-time great quarterback as their football czar, and a chance to win a Super Bowl for the first time since the 1998 season.

However, there is one thing they don’t have:

Brooklyn Decker as a fan.

The curvy supermodel is a devout Carolina Panthers supporter.

Decker, who was born in Ohio, eventually moved to Matthews, North Carolina, which is close to Charlotte. As a result, she grew attached to the Panthers.

Recently, a co-worker bet against her Panthers during the NFC Championship and lost decisively.

A big fan of Ron Rivera, Decker will definitely rooting for the Panthers yet again on Sunday.

EDITOR’S NOTE: If you think this is a lowdown ploy just to post pictures of Brooklyn Decker on the blog…you’re right. 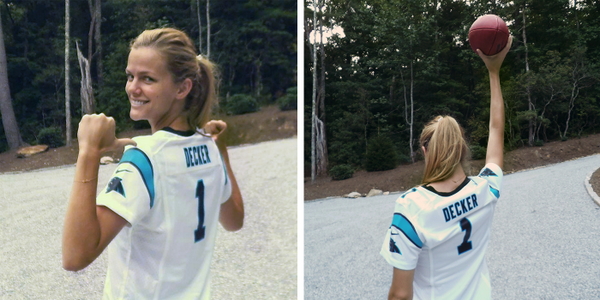