Tied at 24-24 with seconds remaining (and soon after Colin Kaepernick saved the 49ers’ bacon moments earlier), Jimmy Graham hauled in a Drew Brees hail mary attempt and appeared to have scored a game-winning touchdown that would have saddled San Francisco with a 4-5 record.

New Orleans wide receiver Marques Colston threw away a chance for the Saints to reach the NFC Championship on Saturday when he decided to throw a lateral across the field in hopes of setting up a potential game-tying score. Nope. Instead, Colston threw it forward when he could […]

Just when the Philadelphia Eagles bandwagon started to pick up extra passengers, the New Orleans Saints came into town and booted the Birds out of the NFL playoffs on Saturday, 26-24. Eagles radio play-by-play man Merrill Reese described the action and sounded like someone who returned home from […]

If The Playoffs Started Today: The Seahawks Are Probably Going To The Super Bowl Edition

During his post-game press conference on Monday night, New Orleans Saints quarterback Drew Brees defended his team’s play on the road and their harrowing 34-7 loss to the Seattle Seahawks. While Brees remained steadfast in claims that New Orleans could hang with anyone the road, evidence suggests otherwise.

It’s Halloween weekend around the country and that means it’s time to see NFL fans come up with their best NFL-related costumes. This effort put together today by Saints defensive coordinator “Rob Ryan” and head coach “Sean Payton” easily takes the cake. 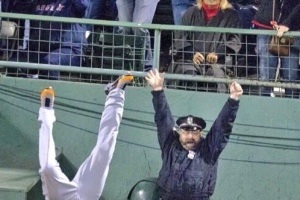 As it turns out, yesterday proved to be one of the great days in recent Boston sports history. First, Tom Brady led the Patriots on a late-game drive to beat the Saints 30-27 with seconds left.

Tom Brady Turns Rob Ryan Into A Pile Of Mush…Again

New Orleans Saints defensive coordinator Rob Ryan’s latest trip to Foxborough ended the same way his last one did on Sunday…with Tom Brady and the Patriots on top in last-second fashion. Brady engineered a fourth quarter touchdown drive to crush Ryan and the Saints with five seconds left […]