Drew Brees Is Not Backpedaling On Roger Goodell Comments

When one of the league’s highest profile players says the NFL commissioner can’t be trusted, it’s definitely a compelling issue. During a recent interview with SI.com’s Peter King, Drew Brees expressed displeasure with Roger Goodell’s handling of the Saints bounty scandal and stated “nobody trusts him.” 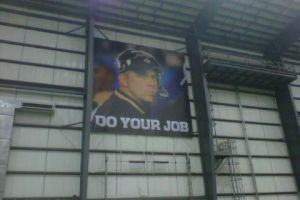 Sean Payton Is Watching You

As the Saints practice at their training camp facility in Metairie, Louisiana, the figure of Sean Payton still lurks in the distance with the head coach serving a year-long suspension. A large sign of Payton hangs in the building with the Belichickian phrase “Do Your Job” in large […]

Drew Brees cashed in today by agreeing to a five-year contract worth $100 million and indirectly proved just how much times have changed in sports. Brees’s deal reportedly includes a $37 million signing bonus and $60 million in guaranteed money through the contract’s first three years.

Drew Brees and the New Orleans Saints will not have to worry about a potential holdout after the two parties agreed to a new five-year contract worth $100 million. According to ESPN’s Chris Mortensen, Brees will make $40 million in the first year of the deal with $60 […]

The JMRA Week In Review: Adrian Peterson Goes To The Clink

Thank you for waiting for the facts. Truth will surface. — Adrian Peterson (@AdrianPeterson) July 8, 2012 The week leading into and immediately following Independence Day can be a snooze in the news department because folks are in party and/or vacation mode. Thanks to Adrian Peterson, so much […]

Months after receiving a year-long suspension over Bountygate, New Orleans Saints head coach Sean Payton is back in the news but for non-football matters this time around. He filed for divorce from his wife of 20 years, Beth, back on June 14, according to The Times-Picayune on Monday. 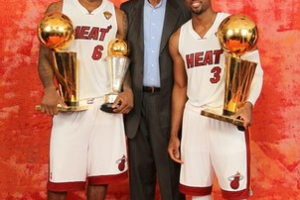 The JMRA Week In Review: Yes, LeBron James Is Still A World Champion

Hey, did you know the Miami Heat are the NBA champions? Oy vey.

In case you missed it on Monday, the NFL made available some of the evidence discovered on the computers of the New Orleans Saints. Suffice to say, these findings (or lack thereof) didn’t make Jonathan Vilma and company very happy.

Things are finally looking up for New Orleans Saints owner Tom Benson after months of bounty talk and suspensions. Benson, who is set to become the next owner of the New Orleans Hornets, was in attendance on Wednesday night to see his new club win the NBA Draft […]

It Doesn’t Pay To Be Warren Sapp These Days